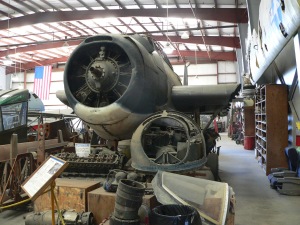 Not to long ago I had the opportunity to travel to the greater Los Angeles area on business.  Realizing how close I was, I escaped to Chino for a half day of warbird heaven as I visited two wonderful air museums nestled along the edge of the Chino airport.  “Yanks” and “Planes of Fame” Air Museums  are a stones throw away from each other and have one of the best collection of warbirds anywhere.

The Planes of Fame museum seems to have a larger collection of both restored and unrestored aircraft to view.  They also seem to do a better job promoting themselves online.  This could be because they actively promote air plane rides and airshow services to help raise money for their museum and restoration projects.  Yanks Air Museum appeared to be smaller but their collection was very impressive.  What really got me excited was their restoration shop.  Yes, this museum restores their aircraft on site and museum craftsmen were actively restoring several different planes.  I was surprised that I was allowed to walk through the shop and see their projects.  It was quite a site to see so many aircraft waiting to be restored.  Pieces of planes were scattered around and piles of boxes loaded with parts were waiting for their turn to be restored.

Take a look at the heap of plane parts in the image above.  Standing on it’s main landing gear is a World War II TBM Avenger.  A torpedo bomber used during the pacific war, the TBM was an aircraft carrier launched warbird built for a pilot, torpedo bomber, and rear gunner.  Notice the gun turret laying just in front of the plane?  This aircraft is powered by an R-2600 radial engine that creates 1.900 horsepower.  What a beast!  One day this sorry scrap pile will look something like the image below.

If you ever travel to the greater Los Angeles, California area, take the time to driving 35 miles east of LA and visit Chino.  Nestled between the cattle farms is the airport and 2 wonderful air museums.  I guarantee you won’t regret your visit!