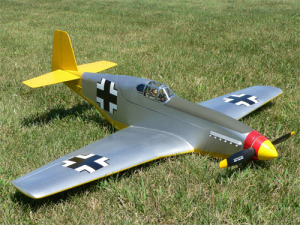 The last build project that I have completed is a P-51 Mustang from Mark Rittinger plans.   It is made mostly from balsa and some foam.  The plane has a 42″ wingspan and flies using an electric motor and lithium polymer battery.   It is a 3 channel plane with throttle, elevator and aileron controls.  The real aircraft was a famous fighter plane during WWII.

During the war,  several Mustangs were captured by the Germans and used to understand its capabilities and shortcomings.  This helped the German pilots determine tactical ways to fight against such a superior aircraft.  Herman Goering, Supreme Commander of the Luftwaffe said “The day I saw Mustangs over Berlin, I knew the war was over”.    North American P-51 Mustangs helped win World War II.  Because of this and a whole host of reasons, the P-51 Mustang is a commonly modeled warbird.  So, for the sake of something different, I painted my plane in the captured color scheme.  She flies great and clips along at a top speed of about 45 miles per hour. 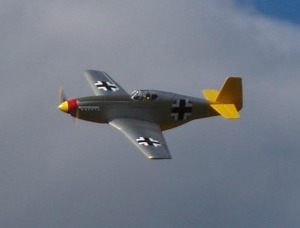 Details including how to get the plans, canopy, foam core wings, a lumber list, all of the electronics needed and any other special supplies like music wire, hinges, covering etc.. can all be found here. There are plenty of pictures of the build as well.