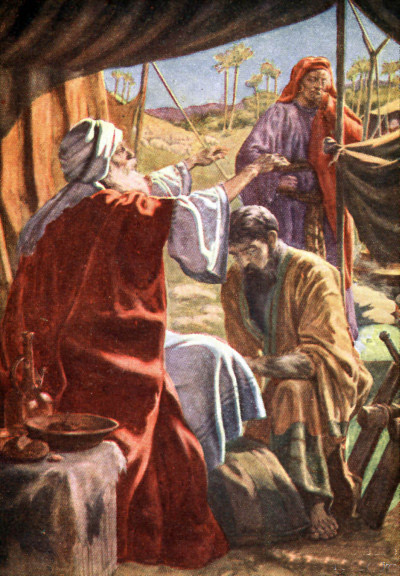 Today we are introduced to several major biblical characters including Esau and Jacob.   Parental favoritism, deceit, fear and anger are all played in day 3 of the Bible in 90 Days..  Esau sells his birthright to Jacob for a bowl of stew and Jacob steals the blessing that Jacob had for Esau.  That scheming plan was hatched from no other than Rebekah (the mother).  Our reading also leads us to learn about Joseph, son of Jacob who is despised by his brothers and sold off into slavery while his father thinks he has been killed by wild animals.  Joseph is taken as a slave to Egypt but God blesses Joseph and is favored by his slave owner who is a very high up official in Egypt.  Later Joseph is deceived and thrown in jail where God blesses him again and keeps him from harm.  God helps Joseph interpret the dreams of the cup-bearer and baker of the Pharaoh.

33 Isaac trembled violently and said, “Who was it, then, that hunted game and brought it to me? I ate it just before you came and I blessed him—and indeed he will be blessed!”

34 When Esau heard his father’s words, he burst out with a loud and bitter cry and said to his father, “Bless me—me too, my father!”

35 But he said, “Your brother came deceitfully and took your blessing.”

Observation
Jacob was old, his sight was terrible and he was about to die.  Jacob & Esau’s mother (Rebekah) helped Jacob steal his brothers blessing .  Esau was the oldest son and deserved the blessing but through lying and disguising himself, Jacob was able to trick his father into believing that he was Esau was the first born.  When Esau found out what had happened he was horrified and begged his father for a blessing but it was to late.

Application
“Life isn’t fair”.  At least, this is what many of us are taught as we grew up.  We may have felt we were wronged by someone who we thought loved us?  In today’s reading we see that Esau’s response was hatred and anger towards Jacob because he felt he was wronged. Fortunately, later in life the two brothers were able to make up.  The two were estranged for many years before they re-connected and worked it out.  Many of us may have experienced a time in our lives when we felt we were wronged and our feelings were hurt.  Know that in all of this that God is with us and He can use that circumstance to draw us closer to Him.

Prayer
God, help me to forgiveness as you have forgiven me.  Let my actions and attitudes reflect the love you display to me daily.