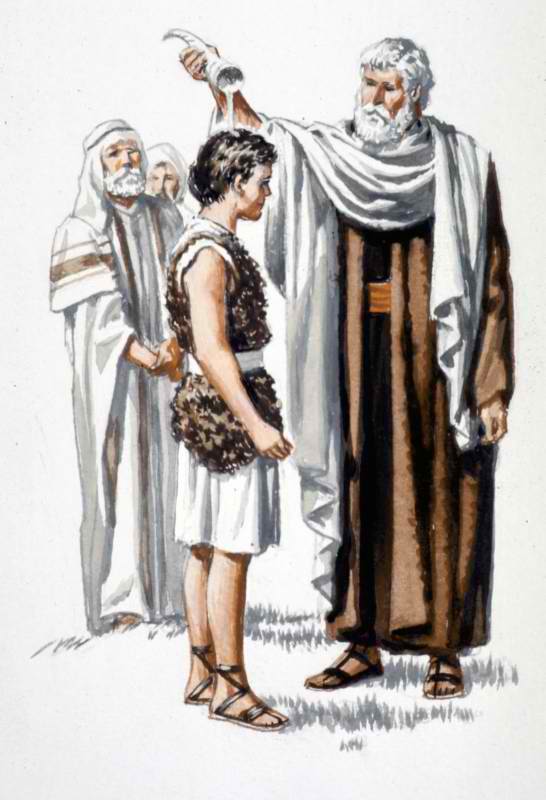 Today’s reading begins with Samuel annotating David as the new King.  Even though it will be some time before David actually becomes King, God has identified and blessed David as the next king.  The Spirit of the Lord departs from Saul and an evil spirit is tormenting him.    The Philistines are threatening Israel as they appear to become weak.  David fights Goliath (a huge giant) with only a sling and stones and kills Goliath.  David comes into service to Saul as an armor-bearer as well as one who plays a lyre to sooth Saul from the evil spirit.  Saul’s begins to fear David and sees him as a threat to his kingship.   David takes  Saul’s daughter for his wife  Later, because of the evil spirit tormenting Saul, he tries to kill David and pursues him into the hills and mountains.  David and Jonathan (Saul’s son) strike up a friendship.  On 2 occasions, David has the opportunity to kill Saul but David spares his life.  As David is on the run he encounters Nabal and asks for food and supplies but is turned away.  Abigail, the wife of Nabal, comes to David and provides supplies and food.  Nabal dies and David takes Abigail for his wife.  Later we learn that Samuel dies and David lives with the Philistines to evade Saul.  The end of our reading reveals a strange encounter with Saul consulting a medium to speak with Samuel.

During the old testament times, people based their impressions of others based on their physical stature or the family they have come from.  The people wanted a King to lead them instead of God so He gave them exactly what they thought they should have.  Saul was tall and strong.  As Samuel was sent by God to select a new king, God sent him to the house of Jesse.  Samuel naturally picked the oldest and strongest son but God stopped him and after reviewing all of them picked the youngest and smallest son to be the next king.  God did this because he knew the heart of each of these men.  He picked David because of his heart for God.

Even today, thousands of years later we still do the same thing.  We pick people based on their looks or their stature.  For us personally, we go through life trying to climb the corporate ladder or seek positions of prominence to put ourselves above others.  Some try and change their appearance so they might be better looking than someone else.  The outward actions, words or appearance of people is not what God looks at.  He looks at our motives and our heart.  We may help someone for selfish reasons.  We want to look good or… if we don’t help someone we might look bad.  Either way this does not please God.  Even though we may reach out and serve others, if our heart is not motivated by God’s grace and love we may as well not serve.  We need to do a “heart check” and determine why we may do good things and serve others.  Is it for us or is it for God?

Father thank you that we can serve you.  Help us to not be self-serving.  Give us the heart to want to serve and help others and doing so, show the love you imparted to us through your free gift of eternal life with you.

Giving From The Heart – Day 31