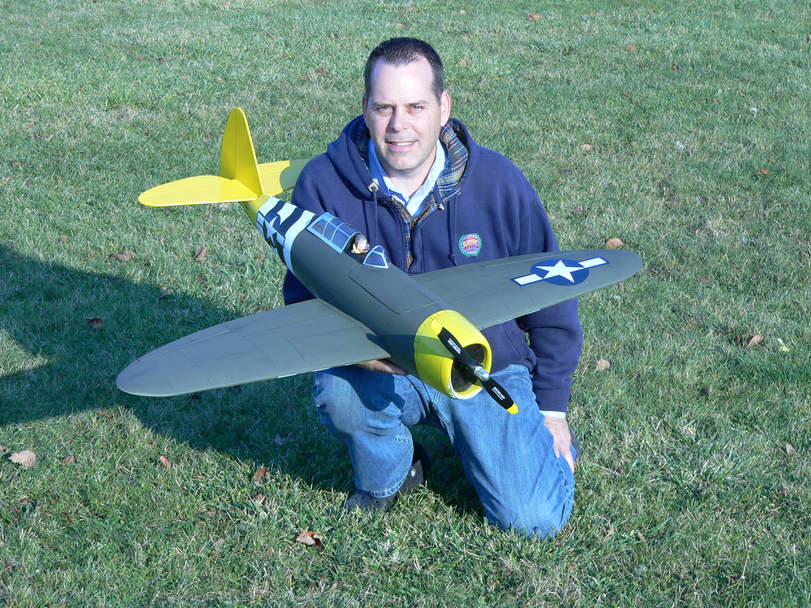 One of my hobbies is flying RC (Radio Controlled) Airplanes.  I started this hobby in my early 20’s and it has been with me since.  One fun aspect of the hobby is to build the airplane, not just fly it.  Taking it one step further, building it from scratch rather than a kit.  I did my first scratch build back in 2009 with the help of an experienced model builder.  He taught me the basics of model building and used this project as my “crash course” in scratch building.   Rather than starting with a simple box style plane, I convinced my mentor into building one of my favorite planes of all time, the P-47 Thunderbolt.

The Aircraft:
The P-47 Thunderbolt was considered by many to be the most significant fighter aircraft of World War II. Built in greater quantities than any other US fighter, the P-47 was the heaviest single-engine WWII fighter to go into production and the first piston-powered fighter to exceed 500 mph. The multi-roll fighter was twice the weight of other WWII fighters of that era. Not only was it big, but it was lethal. With 8 wing mounted .50 caliber machine guns that could deliver 13 Lbs of lead each second the pilots finger was on the trigger, the Thunderbolt was a force to be reckoned. It had self-sealing fuel tanks and was the first to drop napalm bombs and the first to fire 5′ rockets from the wings (according to aviation-history.com) When loaded with armor-piercing incendiary (API) rounds the .50 caliber did considerable damage to light armored vehicles, trains, and aircraft. Seven of the top 10 European Aces flew the P-47 Thunderbolt against the Luftwaffe. Thunderbolt’s knocked 3,752 enemy aircraft out of the air while destroying another 2,800+ on the ground. This aircraft was capable of taking direct enemy hits and still flying. The heavily armored plane sustained 824 combat losses, only .07% of the Jugs didn’t return from a combat mission, the lowest total of any Allied fighter.

About my RC Plane/Modeling experience:
I have flown RC planes on and off for the past 20 years. I have built 3 or 4 kit planes over the years….
1. Carl Goldberg Eaglet 50 with a .25 k & B motor – My trainer plane that got me going into this hobby 20 years ago.
2. Generic P-51 stick & monokote plane (.25 – .40 motor). Of course I opted for the .40 motor and learned quickly that I was not good enough as a builder and pilot. Plane flew for all of 20 seconds before it became a flying lawn dart.
3. Carl Goldbert Piper Cub – slow flyer, semi-scale plane that was (and still is) a blast to fly. I converted this to electric power last april.
4. Stearman Bi-Plane – I don’t even remember who made this kit but it was crap and I never finished it.

I consider myself a complete novice when it comes to scratch building and it is my hope that my perspective of this process will help encourage others to consider giving it a go.

I built this plane with the help of a experienced model builder. I will be using drawings made from 3 views. The size of the Thunderbolt will be a little smaller than 1/10th Scale. It will not be an exact scale replica, but a fun scale flyer. I have not figured out the color scheme or many of the little details, but will keep you posted.

Wingspan will be around 48″ and fly on a Rimfire 42-40-800 Outrunner Brushless Motor. The Model should weigh in around 2.5 pounds. The plane will be foam & balsa.

3-View Drawings for the DC-3 Project

RC Groups.com is the best Social for RC Stuff