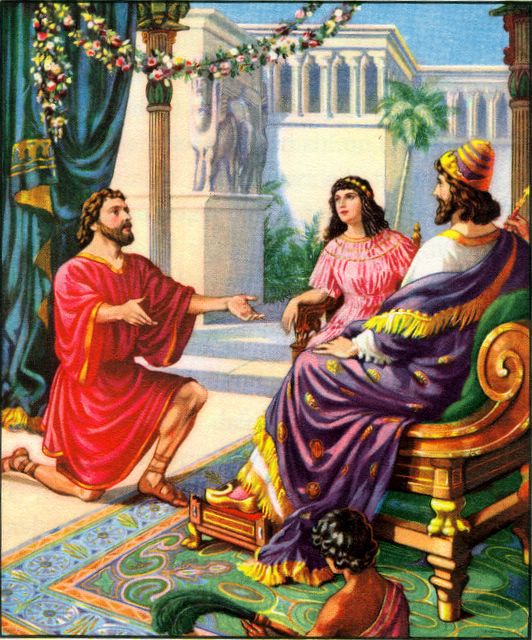 Today’s reading begins in the book of Nehemiah.  The exile is over and Nehemiah, the cup bearer for King Artaxerxes of Persia, has received word from a brother about troubles in Jerusalem. The wall of Jerusalem is broken down, and its gates have been burned with fire.  He asks the king if he can go to the city of his ancestors and rebuild the wall.  In faith, he also asks the king for timber and supplies.  The king grants Nehemiah’s request and he departs for Jerusalem.  When he arrives, he inspects the walls and then organizes the people to complete the work.  Challenges from Sanballot and other officials threaten the project and even Nehemiah’s life, but, ultimately the walls and gates are repaired.  A great celebration took place culminating with all the people coming together as one and asking Ezra to bring out the Book of the Law of Moses to read and teach to the people.  This lasted 7 days.  After worshiping the Lord, all of the people confessed their sins and  signed an agreement to follow God.  The leaders realized that the city was secure but the people didn’t live there.  So, they gathered all the people and cast lots to see who would live in the city.  One out of every ten families would move into the city of Jerusalem.  Ezra found that people were not observing the Sabbath day of rest.  They were buying and selling goods from foreigners on the Sabbath even though they agreed to follow the law.  Ezra instructed the gates of the city to be closed at sunset the evening before the Sabbath and re-opened at sunrise the day after the Sabbath.  This would keep the foreigners out of the city on the Sabbath and prevent the Israelites from being tempted to break the law of God.  Ezra returns back to his responsibilities in Persia.  Later he comes back to Jerusalem and finds out that the priests had not been receiving their portions of the offerings and of them and the musicians went back to their homes.  Ezra corrects the officials and calls back the Levites and musicians to their posts.

23 Moreover, in those days I saw men of Judah who had married women from Ashdod, Ammon and Moab. 24 Half of their children spoke the language of Ashdod or the language of one of the other peoples, and did not know how to speak the language of Judah. 25 I rebuked them and called curses down on them. I beat some of the men and pulled out their hair. I made them take an oath in God’s name and said: “You are not to give your daughters in marriage to their sons, nor are you to take their daughters in marriage for your sons or for yourselves. 26 Was it not because of marriages like these that Solomon king of Israel sinned? Among the many nations there was no king like him. He was loved by his God, and God made him king over all Israel, but even he was led into sin by foreign women. 27 Must we hear now that you too are doing all this terrible wickedness and are being unfaithful to our God by marrying foreign women?”

The scripture above was just one of several examples where the people were not obeying God and his commands.  Nehemiah was quick to correct the people and remind them of what happened in the past.  In this scripture, he is reminding the people that even the great king Solomon was drawn away from God because of his foreign wives.  God had instructed and warned His people not to marry women from foreign lands because they worship false gods.  Nehemiah went to great length including physically knocking some sense into some of the men and verbally reminding them why this command was made.  Even after  everything the nation had been through, some of people were tempted to fall into the ways of the neighboring nations.  The only way to avoid the temptation was to remove themselves from it.

Sometimes we sin because we are to weak to resist the temptations that cause us to fall away from God.  Just like Nehemiah, we must try and remove as much of the temptation as possible so we can live righteous productive lives for our Heavenly Father.  Just like when the city gates of Jerusalem were locked to keep out the foreigners so the Israelites wouldn’t sin by selling on the sabbath, we must lock the gates of our eyes or mind to sinful temptations.  Like the men who sent away their foreign wives because they sinned, we too must send away the objects or people that cause us to sin and turn from God.  His Word is clear and we know the sins that we are tempted with the most.  We must guard ourselves from the thoughts and actions that make us sin.

God help us not to sin against you.  Help us to remove those things that draw us away from you.  Give us the strength and desire to put you first in our lives so there is no room for false gods or sinful desires.  Thank you for mercy and love when we fail you.