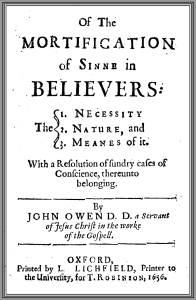 I am participating in a “read along” of a well known “Christian classic” written by John Owen. The Mortification of Sin, also known as Overcoming Sin & Temptation is a book about the duty of Christians to kill sin in their lives daily AND how to do it. Tim Challies is hosting this read along as hundreds of people all over the world participate. Each week we read a chapter and then if we want, discuss is at Tim’s blog.

John Owen lived during the 17th Century. He was a church leader, theologian, and academic administrator at the University of Oxford. His book is written in and “Old English” (Saxon English) language.   That, along with Owen’s writing style and the depth of the topic, make this a challenging read for me.  The key verse and theme of the book is Romans 8:13.   The Apostle Paul writes in his letter to the Romans that “living by the flesh leads to death BUT living by the spirit and putting to death the deeds of the body provides life.”

As I read the first chapter of Overcoming Sin and Temptation, Owen says that mortifying (Killing) sin is a choice Christians make. They can live by the spirit or live by the flesh.  We all know that the a path of living for self pleasure is one of death but what about professing Christians who don’t live to gratify the flesh?  The Apostle Paul was writing to Christians in his letter.  He was telling professing Christians that living by the flesh leads to death.  Owen says that all believers have indwelling sin that we must kill every day.  Not killing sin every day will allow sin to grow and consume us.  It will overtake our lives and lead us to death.

As a believer, we decide to permit sin to live and fester in our lives it will overtake our lives. John Owen explains how and why Christians must kill sin. It is the duty of every Christian to rid sin from their lived daily. Overcoming sin and temptation can’t be accomplished unless we have the help of the Holyt Spirit. Without the Spirit we won’t be killing sin.  Without killing sin,our lives will be robbed of the joy and peace Christ offers believers.  We must call out to the Spirit to battle indwelling sin every day.

The world tells us it is OK to enjoy the “pleasures that life provides as long as we don’t hurt others”. Colossians 3:5 says “Put to death, therefore, whatever belongs to your earthly nature: sexual immorality, impurity, lust, evil desires and greed, which is idolatry.”   If you sense a conflict you are correct. No only does Colossians oppose the world view to do whatever you want as long as it doesn’t affect anyone else.   It also opposes our human nature which is to gratify our desires, give into our lust and love sin.   These are some of the sins of the flesh John Owen talks about ridding from our lives.  He says we must learn and train ourselves to hate it.

It isn’t too late to join in at Tim’s site or simply read it on your own. You can purchase the book or download it for free at Tim’s Site.

Promise Of The Holy Spirit – Day 76