The reading for today includes the book of Jude and then the first half of Revelation.  Jude is a very short letter written in response to false teachers that had infiltrated the church with their teaching.  They were saying that God’s grace allowed Christians to practice immoral acts and that sin was not a consequence.  Jude urged Christ followers to fight for their faith and to throw out any who follow the teaching of this false doctrine.   The last book of the bible is Revelation.  It  is an amazing book written by John.  While he was on the Island of Patmos, he had a vision from God and was instructed to write down everything he saw or was instructed to write.   There are 4 main ways to interpret the book of Revelation.

Called the Idealist View , the creatures and symbols John writes about are not necessarily linked to any specif event that has or will take place in church history.  The various battles against Satan symbolize the persecution of the church.

2.  It is a Prophesy that has already taken place

Known as the Preterist View, they believe that the letter written by John was written before the destruction of the Temple in 70 AD.   The Preterists hold that John was writing to the actual 7 churches  during his day.  The Christians were being persecuted by the Roman Empire and his letter was a meant to encourage the believers.  The full Preterist view holds that all of the events John wrote about have already taken place and the partial view is that many but not all have taken place.

3.  It is a Symbolic Representation of Church History

Referred to as the Historicist View, believers think that all that was written by John symbolizes church history from the beginning of time till the end of time.  The major events in history including wars, religious events like the reformation and actual rulers are referred to in a symbolic way in the book of revelation.

4.  All of these details are literal and will occur

This is called the Futurist View.  They take a literal approach to understanding Johns writing.  Revelation can be broken up into different periods of time.  Chapters 4-9 refer to  a 7 year tribulation.  Chapter 13 refers to a world empire that has not taken place yet.  Chapter 19 is speaking about the return of the Messiah and then a 1,000 year rule of Christ on the earth.  The last two chapters deal with a time after the 1,000 year reign and the new Jerusalem coming down from the clouds to earth.

While each of these views is very different, it should not cause believers to divide over which view they hold.  The more we understand the previous 65 books of the bible, the better we will understand how Revelation speaks to us as followers of Christ.

1 The revelation from Jesus Christ, which God gave him to show his servants what must soon take place. He made it known by sending his angel to his servant John, 2 who testifies to everything he saw—that is, the word of God and the testimony of Jesus Christ. 3 Blessed is the one who reads aloud the words of this prophecy, and blessed are those who hear it and take to heart what is written in it, because the time is near. 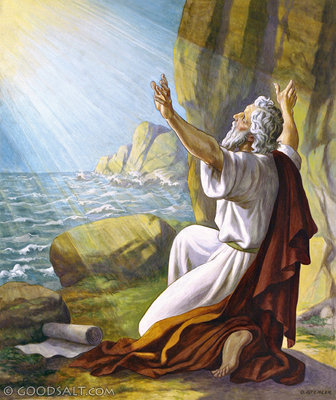 Jesus the Messiah sends an angel to John who is instructed to write about what he sees and hears.   This revelation was given to Jesus Christ From God.  Although Christ is God, the role of Jesus is and has been the mediator between God and people.  Jesus wants His followers to understand what is going to happen in the near future.  What must take place “soon” will be unlike anything they have seen before.   All those who read the Revelation will be blessed.  All those who hear and sincerely take it to heart will be blessed.  The angel says that the time is coming closer.

The Word of God continues to bless those who read and take it to heart.  Our lives will be changed when we hear the truth of God’s word.  We know that the Word is truth and light.   When we live according to God’s word, we will be blessed and also bless others through our words and actions.  Our Lord wants us to look inward at ourselves and sincerely examine ourselves and take to heart his promises.  God needs prepared hearts for his Kingdom.   He needs us to stand ready to spot false teachers as well as those who promote false doctrine.  We can prepare ourselves by studying God’s Word, being in a right relationship with our Heavenly Father and preparing our hearts for service.  We should pray and seek God so we can be used as clean vessels for His Kingdom.

Father thank you for the blessing of your Word and the revelation from Jesus Christ.  It is amazing.