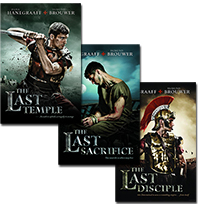 My summer reading for this year has turned out to be an eye opening “Apocalyptic Fiction called “The Last Disciple”.  Written as a “trilogy” (Last Disciple, Last Sacrifice, Last Temple), the “Last Disciple” series presents a first-century view of the great tribulation spoken of in Revelation, the last book of the Holy Bible.

In the timeline of first-century Rome, many characters are introduced including slaves, gladiators and government leaders like Nero.  The main character of the entire book series, Gallus Sergius Vitas, is a trusted adviser to both the Roman Senate and Nero. Vitas is the only man who can help keep Nero in line as the Roman Empire is on the verge of civil war and it’s ultimate collapse.  During this turbulent time, Christians are persecuted daily and even sent to the arena for execution.  Even so, belief in Jesus Christ spreads and a recent letter written by the last disciple John, brings comfort and encouragement to the persecuted.  Nero’s advisers find out about the letter and feel it is a challenge to the deity of Nero. It seems to have clues that speak about the demise of their fearless leader.  Vitas also is trying to understand the letter so he can help keep the empire together all the while dealing with his own internal struggles.  The drama and several unexpected twists set the stage for this thrilling book series.

As a twenty-first century reader, trying to understand the cryptic apocalyptic language used in Revelation is almost impossible. It is almost like reading a Sci-Fi.  Most of us have been taught that the tribulation will take place in the future (our future) as made popular by the well known book & movie series “Left Behind”.  But, to the first-century reader, the Revelation of Jesus Christ was understandable and acted as an encouragement, letting followers know that this tribulation has to happen, if only for a short while.

The Last Disciple series is written in a “Historical Fiction” genre.   Much of the larger events are historically accurate and even some of the characters were real people. The story itself is fiction. Having said that, it is written in a way where the events and characters are threaded into time and made to appear as though they really were part of history. The authors (Sigmund Brower and Hank Hanegraaff) did a nice job inter-twining the characters and history with a great story making this an exciting read.

A Short History Of The Early Church – Book Review