Overview
The Tabernacle has been constructed, and prepared for use.  The presence of God covers the tent with a cloud.  At night it looked like a flame.  When the cloud lifted, the Israelites set out and followed it.  When the cloud settled, they camped.  This is how the Israelites new when to leave or stay where they were.  Several times, the Israelites complained grumbled, challenged Arron or Moses’ authority or simply disobeyed God.  At one point, Miriam and Aaron began to talk against Moses because of his Cushite wife.   Each time, God dealt with his people by either striking them down or instilling a plague on them so they would learn to obey Him.  Later, God sent 1 man from each tribe to spy out the promised land and bring back a report.  When the 12 came back with news, 10 of the men spread false reports and spread fear and discontent throughout the camp.  God dealt with these men and also the people because of their lack of faith.  Anyone age 20 or older would never see the promise land.  Of those who were part of the exodus from Egypt, Only Caleb and Joshua (the two who didn’t spread false reports) would be allowed to cross over because of their faith.  All of the other Israelites who were part of the original exodus would not be permitted into the promised land.   That entire generation was to die in the wilderness.  When it was time to set out and move, the Edomites would not let the Israelites cross their land.  The Israelites then had to travel a different way and because of this,  the Cannanites attacked.  Israel responded and defeated the Cannanites.  At the end of our reading for the day, Aaron finds out that it is his time to die and God takes him to his people.

12 But the LORD said to Moses and Aaron, “Because you did not trust in me enough to honor me as holy in the sight of the Israelites, you will not bring this community into the land I give them.” 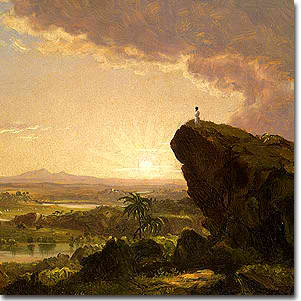 Moses Looking Across the Jordan at the Promised Land

The people were grumbling for water and Moses went to God and told him what was taking place.  God gave instructions to Moses of what to say and do.  As Moses did follow most of God’s directions, he added a couple of his own including calling the people rebel-rousers and then striking the rock with the staff.  Moses had an attitude against the people which interfered with what God was asking him to do. “Because you did not trust in me enough to honor me as holy in the sight of the Israelites, you will not bring this community into the land I give them”.

Just as God gives Moses instructions, we have the bible which includes our instructions from God.  When we don’t obey God, we miss out on his full blessing.  Just as Moses missed out on the blessing of crossing over into the promised land, we can miss important blessings in our lives because of our disobedience.  We should always obey & honor the Lord so that we can have whole, fulfilling lives with our Heavenly Father.  Don’t miss out on God’s blessing!