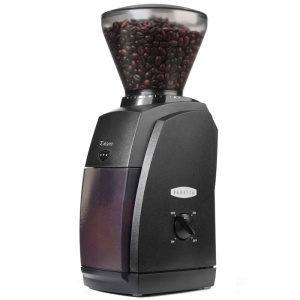 Today the Baratza Encore coffee grinder sits on my counter ready to grind. My coffee preparation methods were about to change for the better. My old Cuisinart Grind & Brew was both a grinder and brewer. Well, after 6 years the Cuisinart finally died. After some careful research, I purchased a Bonivita coffee brewer. It is a great coffee brewer but it doesn’t include a grinder. So it was time to invest in a quality coffee grinder. Having a stand-alone grinder will be handy for single serve “pour-overs”. Coffee grinders use either a blade or a gear/burr type grinding system. The better, more consistent way to grind is with a burr style grinder. After some research, I decided on the Baratza Encore burr grinder

because of the features, reputation and price.

What is a Burr Grinder?

The Baratza Encore coffee grinder is a conical burr grinder that offers a wonderful range of grinding styles using over 40 different settings ( I have mine set at 18). Two hardened steel blade rotate at a low 450 RPM, crushing the coffee beans with very little friction. This technique releases the coffee’s oils, allowing them to be extracted during the brewing process. Some say that the burr grinding method will even enhance the coffee flavor, offering a smoother and richer coffee. I don’t know about that but I can confirm that it does offer a consistent grind every time it is turned on. Grind size ranges from 25o microns all the way to 1200, very impressive for a burr grinder in the same price range as the Encore. The manufacturer guarantees the blades to remain sharp for many years.

There are several features that make the Baratza Encore coffee grinder shine including removable burrs for easy cleaning, pulse button for short grind bursts, 8 ounce hopper capacity, 5 ounce grounds bin capacity and a new generation gearbox that makes this grinder quieter and stronger than ever. It isn’t the smallest grinder on the market but I think it is one of the best values for an entry level conical burr grinder.

Now for some of the Baratza Enore coffee grinder shortcomings. I have been using this grinder for about 3 months and the biggest irritation is the mess. Every time I grind coffee and then remove the catch basin to transfer the grinds into my brew system, coffee grounds fall from within the grinder system out onto the counter. Even after tapping the top, side and front of the grinder before removing the basin, grinds will still fall out making a mess. The second shortcoming is the length of time it takes to grind. I also have the Breville BCG450XL Conical Burr Grinder I use at work and it grinds 3 times quicker than the Baratza Encore. I don’t really see any difference in grind quality between the two. Lastly, even though the manufacturer boldly states it is quieter than past models, this grinder is still loud compared to others I have used including the Breville.

Overall this is a great grinder for the price. The Baratza Encore coffee grinder appears to be made of quality parts and is heavy, indicating metal parts rather than loads of plastic ones. Grind quality is consistent and the 40 settings make this a very adaptive grinder based on brewing methods and personal preferences. Thumbs Up.