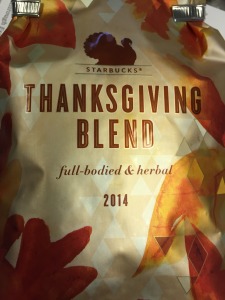 Two years ago I posted how much I like the Starbucks Thanksgiving blend coffee.  Again, I am sipping on their nice, full bodied coffee although it is still a little dark for me.  I have some Marketing and Sales observations that I would like to share regarding Starbucks and their Thanksgiving Blend.

Over the years I have noticed how the Christmas Season as a whole has lengthened in time.  It use to run from the Friday after Thanksgiving through Christmas.  Halloween has also gotten more attention and  become one of the top sales holidays here in the United States.  The result of these two Holidays becoming a bigger deal has caused the Thanksgiving Holiday to become a short-lived, “By The Way” holiday that misses the important message of being thankful.  Of course, other than the grocer, there isn’t much money in Thanksgiving and it shows in the marketing of just about every retailer.

Starbucks has been using the same farms from Sumatra and Guatemala for this rich full body blend.  It is so well liked, demand is increasing yet the farm can only produce their maximum yield amount each year.  The irony in all of this is twofold.

1.  Their best coffee only has a 2 week lifespan (thanksgiving blend)

2.  Their worst coffee has the longest lifespan (holiday blend)

The Heart of Christmas