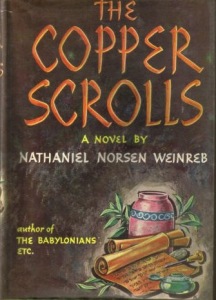 I just finished reading “The Copper Scrolls” written by Nathaniel Norsen Weinreb.  A historical fiction taking place around 70 AD, this novel is definitely a good read.  Without giving it away, the story is about a young apprentice (Kandane) working for Antioch’s infamous goldsmith (Corbo) who believes gold and silver are the only thing that bring long term happiness.  Life get’s very exciting for the duo as an Essen Jew (Avrim) contracts them to make a top secret scroll made from copper.   Little does Kandane know but this assignment will not only change his life, but it will effect the lives of millions of people for centuries to come.

Most of us have heard of the Dead Sea Scrolls.   Between 1946 and 1956, ancient texts (scrolls) written on parchment and papyrus were discovered in caves at Quamran along the Northwest shore of the Dead Sea in the Middle East.  Over Nine hundred texts containing Hebrew Scriptures and other writings were found in clay jars in these caves.  Also found was a scroll made of copper that was much different than the other scrolls.  Rather than scriptures and other literary writings, the copper scroll contained a list of locations of gold and silver items buried.  Yes, the copper scroll spoken of in the novel is the same one found in Quamran near the Dead Sea along with many Biblical scrolls.  Today, the Copper Scroll is located at the Jordan Archaeological Museum in Amman.  There have been other novels written about the copper scrolls but this was the first historical fiction ever written about them only a few short years after they were discovered.  While this book might be old, the story is timeless.

Some books are a real struggle to read while others are a joy as the words flow together.  Weinreb did a fine job introducing and developing each of the characters, their background, interests, strengths and weaknesses.  I could really sense what life was like around the time of the Roman Empire and how society felt about slaves, the rich, poor, educated, uneducated, attractive, ugly and various religions.  It only took a few pages of reading before I was quickly drawn into the story.

What I enjoyed most was reading about real history threaded through fictional characters.  The author used a combination of romance, action, suspense and mystery helped make this story exciting and come to life.  Find a used copy somewhere online like I did and spend a few hours reading it.  You will be glad you did. Maybe I can win you over to the “historical fiction” genre.  Stories like “The Weeping Chamber” or “The Last Sacrifice” trilogy or “The Constantine Codex” all fall into this genre and have been some of my favorite books.

A Short History Of The Early Church – Book Review